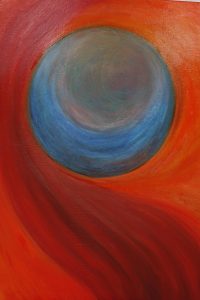 Now the earth was unformed and void, and darkness was upon the face of the deep; and the spirit of God hovered over the face of the waters – Genesis, Chapter 1, Verse 2
I am Evelon, and this is my story.
I am Evelon of the Magnetic Field. I am Evelon of the Divine Order of Malach-Tzedek. It is a Hebrew name, so ancient it is that it goes back to the times when the current Hebraic People hasn't even existed yet; an Order which all human Masters or workers of Energy know in one way or another.
It is my friend Rachel who is dictating my words as I wish them to be. Rachel is a human being, she is flesh and blood, she is soul and mind.
She is a spiritual essence coming to life and existing into a human body. She is One with God Almighty; she is One with the Universe, with the etheric Beings of the Universe.
The reason for that choice is very simple and very clear indeed. Let there be no doubt whatsoever – no discrimination nor any differentiation has dictated in any way this Universe's choice except that of belonging to the very ancient Hebraic People of Israel.
I automatically see your minds wandering to the times of the Bible, but please do not do that, because what I say does not match whatsoever to that period of time in your linear counting. I mean way and long before that, long before that.
I know that for most of you it's great news, or bewilderment, since how can this be possible?!? For that, let me please explain.
Eons of time ago God Almighty has decided to create a new universe, a universe which could give life to many forms of existences, to as many as possible species of man which would be able to survive in various conditions. Within that vast and ever expanding universe he has decided to create a special and unique planet; not just another planet, but a planet from which we, all Beings, could learn, a planet which would be like a cosmic giant library to every Being in the Universe.
He has created Earth.

You all know the story of Creation as it has been passed on during generations. Each culture, each religion has its own version, but basically all humans agree on its factual events: God created Heaven, meaning the Universe. He also created Earth with all its lands and waters, then He created the flora and the fauna and finally, after millions of Earth years he created Man. Man and Woman alike, I mean. You all have your beliefs and history on how this was done. This is not the place to argue or accept your beliefs but simply to tell the facts as they were. One fact remains unanimous, though. All of you accept the fact that Man is God's Creation, created as a duplicate, as closely similar to God as can be.
Genesis 1, 27
" So God created man in his own image, in the image of God he created him; male and female he created them."
It is all so simple, yet all so complicated. I really don't know where to begin with in order to explain this statement of mine, since in reality what I'm saying is so vast, so immense!
You must understand! As an etheric spiritual Being, my main job is to instruct, to guide people, to even encourage them to defy their very existence, to ask questions about their real origins, the origins of mankind – This is what it's all about, isn't it?!?
The question, then, is "why is it so difficult?" "Why is it so difficult to understand the very existence of Man?" You are looking for living signs from far away planets, you make your best to look for other existences in outer space galaxies believing you're not the only living forms in this entire universe, but all you find is basically zero, nothing but spectacular pictures of planets and stars and nebulae which show almost none but the physics of things – not the real quest, not the real answer to the enigma of your very existence.
Well, the answer, as usual, lies deep within you, inside that sparkle of God that exists in each and every one of you.
Any life form that exists in the universe has that sparkle; any form whether it's a stone, gas, animal, plant, a humanoid or a human being, every one carries within oneself that tiny gist of God Almighty – everyone! Most of you, humans, have already understood that, but you're doing nothing with that information. Instead of looking deep within yourself you're looking for answers outside, in far and unreachable places that even your outmost sophisticated ancestors couldn't get there, and you know by now enough physics to understand why.
You might ask now, "Then why is it so difficult to truly look deep within ourselves? Why can't we reach that sparkle so easily?" It looks as an easy job to do, yet it's so hard, so difficult to accomplish.
Allow me now to explain the reason for that.
The moment you look up for spiritual guidance, you declare to us, the etheric spiritual Beings of the universe from the other side of the Veil, that you are ready. You are now ready to take one step further. Not just survival, simple and human survival of the species but something else, something deep which leads you to changes in your life. This something tells you and us that you are ready to unify with your own higher self thus unifying with that sparkle, lighting it and giving it life.
We call it "coming home"; and that my dears doesn't necessarily mean death or separation from your own flesh and blood.
There are so many ways to "come home". All of you, dear energy workers all around the world, have found the one that is suitable to you, thus holding just one piece of this enormous enigma you are dealing with. Each way is blessed, each way is true – not just for you but for the entire universe.
You must be focused on your "coming home" yet at the same time be so earthly grounded, so well aware of your well being, of you being a human being flesh and blood with all that it takes.
That's the most difficult part of your "coming home" – the most difficult one!
And that's what my friend Morella has done. She has found her own way, her own path. Like most of you, energy workers, she has passed through some difficult phases in her life, yet she has done something else – she has stepped one step further; she has returned home.
The concept of "coming home" is not new to you. Some of the most respected energy workers around the globe are doing that at the same time as I speak. Yet, do you really know the true meaning of "coming home"? Do you really and truly understand or grasp the implications of a human soul being able to wander between Earth and the various dimensions or levels of time and space?!? Not by any physical means but rather spiritual one, I must stress the point… By all means it is an achievement, an extraordinary human achievement which has been the privilege of few people around Earth, very few people – and my friend Morella is among them.
Here, with your humble permission, dear readers, I would like to make a wish – a wish coming from an enlightened Being as I am:
"May all human beings find their own way to return back home.
May all human groups and societies join together to create that Divine wish and make it true".
Evelon